THE Highlands are in line for a golf tourism boost as the Royal Dornoch Golf Club team prepares to host a unique double header.

“It will be the first time both events have been held simultaneously at the same venue,” said club general manager Neil Hampton. 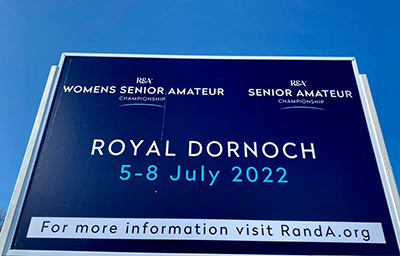 “Something on this scale presents logistical challenges for the team here but we are all looking forward to welcoming the competitors, their families and friends.

“Many of them are making a week of it here and the business will be welcomed by the local hotels, bars, restaurants, caravan sites and bed and breakfast establishments.

“We know for certain we have fields of 198 men and 90 women taking part but there are all the other people, many of them volunteers, who go into presenting a successful golf event.

“Spectators are also welcome to come along to watch the action.

“While the numbers overall involve some educated guesswork, the clubhouse and our team isn’t big enough to handle the numbers involved in terms of keeping everyone fed and watered.

“So we are outsourcing some of it and a big marquee is going up in the car park near the clubhouse.

“Everyone is working closely together to present a memorable championship on and off the golf courses.

“It’s great for the area and I’m sure some of the visitors will be bringing their golf clubs and sampling some of the wonderful courses we have in the Highlands during their stay.”

The 2022 tee sheet for visitors to Royal Dornoch’s Championship Course had to close earlier in the year due to pent-up demand.

“It’s great to hear so many different accents in the town again,” said Mr Hampton.

“We are delighted to be welcoming visitors back to Royal Dornoch in big numbers after the travel restrictions imposed by the pandemic.

“More than 50% of our visitors are from North America, along with a third of our members.

“It is a huge market for us and clearly there are major economic benefits for the town and the surrounding area.

“Hosting The R&A Women’s and Men’s Senior Amateur Championships is an added bonus.”

The R&A this week confirmed Royal Dornoch has been selected to host another prestigious amateur event next summer.

The biennial Vagliano Trophy, and the Junior version, are contested by women’s and girls’ teams flying the flag for GB and Ireland and the Continent of Europe.

Mr Hampton said: “We are thrilled to be working once again with the team at the R&A and in selecting Royal Dornoch to host these matches we appreciate the recognition given to our Championship Course as being amongst the best in the world.”