THE final phase of an ambitious project to preserve Royal Dornoch Golf Club’s status as one of the world’s leading courses is under way.

Hard on the heels of major improvements to the 7th hole on the Championship Course, the greenkeeping team and renowned UK architects Mackenzie and Ebert have turned their attention to “Dunrobin,” the 434-yard Par 4 8th hole.

Hundreds of tons of gorse and soil are being removed to open up the breath-taking views of 1302-foot Ben Bhraggie which generations of golfers previously enjoyed.

The makeover is also designed to restore the challenge envisaged in the 1940s, when a series of tweaks were made to the original Old Tom Morris lay-out. 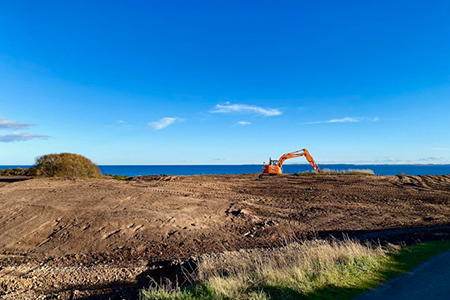 “This is the final piece in the jigsaw and we are confident it will further enhance the experience golfers enjoy when they play the Championship Course,” said deputy greenkeeper Scott Aitchison.

“The main challenge we face is ensuring the work is completed and the hole is back in play for the new season.

“The new tees are being pushed towards the location of the old 7th green.

“The likelihood is that more golfers will be playing their second shots into the green from the top of the hill, as was the case before the advances in golf club technology.

“In a sense, we are turning back the clock to the way the hole was designed to be played.

“Trust me, the hole is going to be even better. There is sure to be a real wow factor with the views being opened up again.

“The backdrop of Embo, the sea and Ben Bhraggie in the distance is amazing.

“The gorse had grown and blocked it out for years.”

The club’s long-term masterplan for the renowned Championship Course has been fully vindicated.

“Being rated so highly in various polls is always a source of pride to everyone involved with the golf club,” admitted Scott.

“The feather in our cap as a greenkeeping crew is that we were trusted to carry out the changes to a number of holes in-house. We have a really experienced team here.

“Initially, we have had to do a lot of scraping, removing gorse and a layer of dead mulch over a 200-yard stretch, getting down to hard gravel on what was a raised beach.

“It will be replenished with sand and rootzone.

“We are liaising closely with the Mackenzie and Ebert team about the levels they want.

“All the material being removed is going to compost on-site. We are always very conscious of our environmental responsibilities. It will break down over the years and be used here in the future.

“The soil we are using to construct the new-look hole has been taken from the site of the multi-use games facility being created for the local school.

“The changes to 7th hole – opened two years ago by Paul Lawrie – were far-reaching but we had the luxury of having the previous fairway and green in play while the work took place.

“We grew in that new hole from seed. This one has to be turfed to ensure we are back in play as soon as possible.

“On the plus side, the changes to ‘Dunrobin’ focus only on the first half of the hole, moving the tees a little, changing the angle of attack and opening-up those fantastic views.

“Obviously a mild winter would help our cause but we are not naive, we will have to protect the fairway initially.

“But the new turf should knit in quite quickly with the rising temperatures in the spring.”