ROYAL Dornoch’s role in spreading the golfing gospel to North America features in a compilation of poems, essays and reminiscence which is generating interest, and support, for the award-winning Golf Memories Scotland charity.

“Mind the Links: Golf Memories” is published by Tippermuir Books, with around 70 contributors supporting a project which has been backed by The R&A, Scottish Golf, The R&A Golf Museum and Carnoustie Golf Links.

Paul Lawrie, The Open champion in 1999 and Royal Dornoch honorary member, has provided the foreword to a book which was launched at St Andrews to coincide with the 150th Open Championship.

He noted: “I am proud that our sport can contribute in a small way to help bring communities together and help people overcome the challenges associated with dementia and memory loss.”

The world’s greatest golfers provided images at The Home of Golf that will live long in the mind of spectators and television viewers around the world, including tearful Tiger’s farewell wave on the Swilcan Bridge and the fascinating final round joust with Rory McIlroy which secured the Claret Jug for Australian star Cameron Smith.

In years to come, the milestone championship will be used to trigger memories and discussions among dementia sufferers with a passion for golf.

Among the many articles featured in “Mind the Links,” is one recounting the remarkable legacy of Dornoch-born golfers like Donald Ross, Bob Grant, Alex Murray, Don Sutherland and the MacDonald brothers, Bob, Bill and Jack. All enjoyed successful careers after crossing the Atlantic in search of fame and fortune.

Bob returned to the spotlight earlier this year on the 100th anniversary of his Texas Open win. 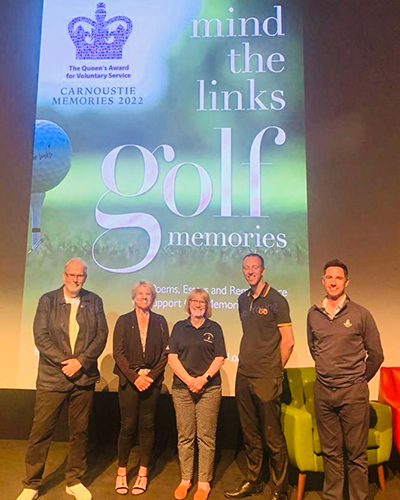 Before Covid struck, a memories group was meeting at the Royal Dornoch clubhouse.

Jim said: “The tales in the book range from the personal and the precious, from the ordinary to the extraordinary.

“The youngest contributor is 12 and the oldest 92, and he was determined to be in the audience for the launch.

“It was a challenge to bring it all together in time for The Open but the support we received from so many contributors was wonderful.”

At the book launch, Michael Wells, CEO of Carnoustie Golf Links, explained the warm relationship The Open rota venue has with Carnoustie Golf Memories, which recently received the Queen’s Award for Voluntary Services.

Lorraine explained: “Whilst what we do is not a ‘cure,’ the positive and visible impact of making the time to find the right key to unlock an individual’s memories is priceless and so extremely rewarding for all.”

At the launch event Jim and others entertained the audience with readings before a Q&A with Scottish Golf’s Kathryn Imrie and Dr Andrew Murray of The R&A and the University of Edinburgh.

“Mind the Links: Golf Memories,” priced £15 with free postage and packing, is available from Tippermuir Books at https://tippermuirbooks.co.uk/product/mind-the-links-golf-memories/

All profits will go towards extending the reach of the Golf Memories charity.