The putter used by one-time Royal Dornoch caddie Bob MacDonald in winning the first ever Texas Open in 1922 took pride of place at the Centennial tournament in San Antonio.

His son Bill made a three-day drive from his Florida home with the treasured memorabilia marking his father’s success in the USA after leaving Scotland as a young man.

Bill took great delight in showing the putter to Scots competitors Russell Knox, the first round leader who hails from Inverness, and Robert MacIntyre, from Oban. 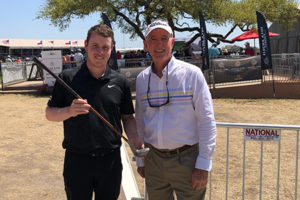 The club was displayed at the Valero Texas Open alongside the trophy won on Sunday by American JJ Spaun.

In addition to an invitation to The Masters, he picked-up a cheque for $1.5 million.

The first winner, Bob, left San Antonio £1633 richer. It was the richest prize in golf at the time.

While winter is still keeping hold of weather patt

While our Championship ⛳️ may have been closed

Always some testing pin positions on the 8th par 4

Looking forward to Spring ⛳️ even if it has a

No,not a swimming pool but one of the 10 bunkers t