The Toronto-based, award-winning author was joined by his wife Nell, family, friends and members for a clubhouse ceremony held during his latest visit to a town which first cast its spell over a young Canadian nearly 50 years ago.

Lorne later spent the summer of 2000 with Nell based in a flat above the Dornoch Bookshop.

The resulting book, “A Season in Dornoch: Golf and Life in the Scottish Highlands” – with a foreword contributed by Sean Connery – captured the essence of golf at Dornoch, weaving in the landscape, history, culture and characters who took the couple under their wing.

“Lorne’s book and his writings over the years have brought international recognition to Royal Dornoch,” said general manager Neil Hampton.

“The golf club and the town are very much in his heart.

“During the summer he spent with us, like so many people, Lorne came to appreciate what a magical place this is, not just the golf courses but the town and its people.”

“Lorne has been a great supporter in promoting the club and our courses throughout the world and this is a special night in the history of the club,” he told the assembled gathering. 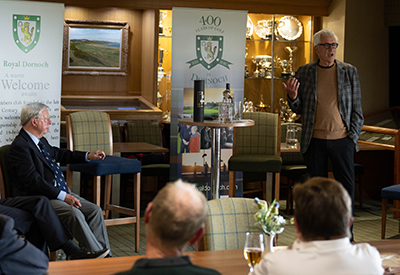 Before taking part in a question-and-answer session with members, Lorne – who celebrated his 74th birthday during the trip to the Highlands – reflected on a stellar career in sports journalism which began with a newspaper column drawing on his experience as a Tour caddie for Canadians Bob Dickson and Jim Melfort.

“At the 1980 Canadian Open in Montreal Jim was playing in the weekend group with Jack Nicklaus and Lee Trevino,” recalled Lorne. “That was a great start for any columnist.”

The hook-up with Woods marked the 20th anniversary of Tiger’s historic win at the ‘97 Masters, when he famously claimed victory by an extraordinary 12-shot margin on the field.

Reflecting on an enduring romance with Dornoch, Lorne confesses the Highlands, its people – and whisky – enjoy a special place in his heart.

“Some of those who feature in the book are no longer with us but, on this visit, it has been nice meeting up again with people like Willie Skinner, who I played with that summer when he was the professional here.”

Dornoch, he admits, “has seeped into my soul,” since a longer-than-planned, 10-day excursion in 1977 en route to a flirtation with the Amateur Championship at Ganton.

“To receive life membership of Royal Dornoch is a great honour,” said Lorne, a colleague of the late Herbert Warren Wind, another celebrated writer who enjoyed similar status at the club for his role in elevating the historic links to global status.

“There is a worldwide community who care about the club and I will keep spreading the word.”