THE New Year has begun with welcome news for everyone at Royal Dornoch Golf Club.

After lengthy negotiations, we can confirm that a new 99-year lease has been agreed with The Highland Council.

Members will recall that discussions on a fresh agreement for the use of Common Good Land began before the pandemic struck.

Now, with a new lease signed off, members will be consulted on the potential for a new multi-million-pound clubhouse.

Club captain Professor David Bell is thrilled with the milestone agreement, and he has highlighted the hard work carried out by predecessors and club management in getting it across the line.

“We are delighted to have concluded a formal agreement with The Highland Council, with welcome support from the Dornoch Area Community Council,” he said.

“This represents an important chapter in the history of a our club which dates to 1877, although we know golf was being played on the links land long before then.

“Our previous lease ran to 2072 but four or five years ago we were advised that some changes would be required if we intended to build a new clubhouse on the Common Good Land at any stage.

“It is very early days, but we can now, with confidence, say we are allowed to build a new clubhouse should that be the route members wish the club to take going forward.

“We are grateful to past captains Willie MacKay and Rob Murray and general manager Neil Hampton for their substantial contributions. 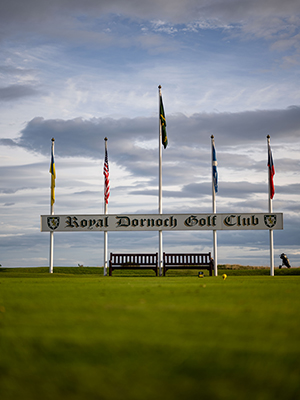 “Under the terms of the new lease we have agreed a £25,000 annual payment going up to £50,000 on a sliding scale depending on visitor numbers.

“We have been thrilled with the demand from visiting golfers from around the world making the journey here since travel restrictions were lifted.

“The club certainly anticipates paying the £50,000 figure each year and that money will be dispersed for the benefit of the Dornoch community through the Common Good Fund.

“It’s great news for the town and the club will continue to support local groups and organisations with our Community Fund grants, which totalled more than £12,000 last year.

“Golf tourism plays a huge role in the local and regional economy and the town’s sporting facilities have already benefited substantially from measures designed to make certain there is scope for any new clubhouse.

“To improve our car parking facilities, the bowling green was moved sideways onto the old tennis court. And to replace the tennis court, the club donated £100,000 to create a new multi-use games area at Dornoch Academy that has now been completed.”

“This new lease is the culmination of three years of negotiation between the Royal Dornoch club management, Highland Council as trustees of the Dornoch Common Good, and the Dornoch Area Community Council representing the interests of the residents of the burgh,” said Councillor McGillivray.

“What has been delivered is fair, pragmatic and realistic and reflects the best interests of the Ancient Royal Burgh of Dornoch, and the present and future well-being of the Royal Dornoch Golf Club.

“I particularly commend as part of the overall package the funding of the new sports facility at Dornoch Academy, the only improvement to physical education at the school since David Bell, Willie MacKay and I first walked in the door as S1 pupils in 1963.”

“I am so pleased that we have been able to come to an agreement that satisfies the aspirations of all three parties,” he said.

“We can all now look forward to a future whereby the world class reputation of the Royal Dornoch Golf Club and the thousands of visitors it brings to the area can be harnessed to maximise the benefit to both the club and the wider community.”

Days to look forward to out on our links 🙌 #roy

It’s winter here in the Northern Hemisphere but

Happy New Year 🥂 to all from everyone here at R

First snow of the winter now blanket the courses o