ROYAL Dornoch Golf Club is preparing to roll out the red carpet for an historic double header with an international cast.

For the first time, The R&A has selected one venue to host concurrently both the Women’s and Men’s Senior Amateur Championships. 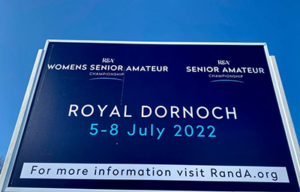 A ballot was required to finalise the fields for the championships, being staged from 5-8 July.

Spectators are welcome to attend free of charge to watch the action in the Highlands.

While the 198-strong Senior Men’s line-up features several Highland competitors among a 34-strong Scots contingent, they will be joined by players flying the flag from 15 countries.

There will be 53 American players teeing-up, including defending champion Gene Elliott, from Iowa, who became the 23rd US winner of a championship dating back to 1969. Other players are travelling from Canada, Australia, Brazil and various European countries.

Twenty nations are represented in the 90-strong Senior Women’s field which includes far-travelled players from the USA, Guatemala, Peru, Argentina and Australia.

Neil Hampton, General Manager at Royal Dornoch, admits the ground-breaking decision to entrust the Highland club to host the championships is a source of pride to members and staff.

“In many ways we are entering uncharted territory but we are confident that Royal Dornoch is ready to rise to the challenge and, rest assured, the town will offer a traditional Highland welcome to the many competitors, their families and supporters,” he said.

“The twin R&A championships will roll out over four days on both the world-renowned Championship Course and our highly regarded sister Struie Course, which is recognised among the country’s top 50 links courses.

“Both courses are already in fantastic condition and our greenkeeping team, led by Eoin Riddell, is applying the finishing touches to ensure a memorable experience for the competitors.”

He added: “We are well aware Royal Dornoch will be creating a little bit of history and we have been working with The R&A to present the Championships to a world-class standard.

“Elite Senior amateur players from around the world are making tracks for Dornoch and we will be welcoming spectators keen to follow the action. A team of volunteers have been assembled to provide the support structure necessary to present a championship of this stature.”

Phil Anderton, Chief Development Officer at The R&A, said: “We are delighted Royal Dornoch is hosting concurrently both the Women’s and Men’s Senior Amateur Championships for the first time.

“The club is world renowned and the Championship and Struie Courses are sure to provide a stunning venue for these prestigious events.

“Golf is a global game and we have been delighted with the volume and diversity of entries as men and women compete in the same week across both Championships.”