The curving bay of the Dornoch Firth and its magnificent white broad beaches are backed by a narrow strip of softly contoured dune land rising in two distinctive levels, providing just enough room for parallel fairways. The ridges, hillocks, dunes and undulating links land have all the characters of the best of links courses, and most of the difficulties. 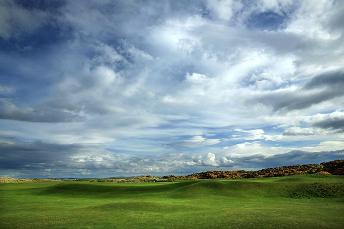 The first eight holes follow the ridge and the remaining ten holes played in the opposite direction are bounded, except the 17th and 18th on the left by the sandy beaches of the firth.

The par of 70 is evenly distributed over the two halves each having two par threes, a par five and six par fours. If the wind blows the course will demand more from the player especially the par four finishing hole where a par can be considered a birdie. Old Tom Morris was the architect responsible for extending the original 9 holes layout to 18 holes in 1886. He introduced the plateau greens which are the soul of the course, their uniqueness lies in their size and their inverted saucer shapes.

The course as it now stands is a final remodeling largely the work of George Duncan with influence from Robbie Grant the then Head Greenkeeper, the new holes are in keeping with and incorporate the features Old Tom Morris introduced to Dornoch. The holes form the present 6th to the 11th loop and were constructed in the late 1940’s after the 2nd world war.

Please read the FineGolf review of the course here.