Royal Dornoch is proud and delighted to work with our local distilleries Glenmorangie, Balblair and Dalmore, to give a true Highland welcome.

The history of Royal Dornoch & Glenmorangie, Scotland’s favourite Single Malt Whisky, famed for the tallest stills in Scotland and pioneers within the whisky industry, is enjoyed by whisky aficionados around the world. Carefully crafted by the famous Men of Tain to a level described as ‘unnecessarily well made’ Glenmorangie takes great pride in the lengths to which it goes to create some of the world’s most sought-after single malt Scotch whiskies.

Glenmorangie is proud to be the ‘Spirit of The Open Championship’, and it seems fitting that the nearby distillery in the Royal Burgh of Tain and the world renowned Royal Dornoch Golf Club should have close ties. 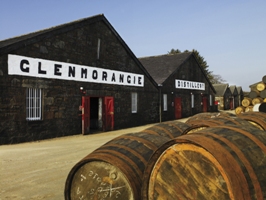 The legendary course designer and pioneer of professional golf, Old Tom Morris, who created some of the great golf courses on which The Open is played, remodelled and extended the original 9-hole Royal Dornoch golf course in 1886: one of the new holes, the 13th, was named ‘Morangie’ because of the view of the Morangie Farm and distillery across the beautiful Dornoch Firth.

⛳️❄️☀️🙌 all have a warm weekend whe

Happy Thanksgiving to all our 🇺🇸 members, vi

🗓. Today marks the birth date of the revered Do

You can see from this angle of “Foxy” ⛳️ y

Another early start for the greenkeeping team, but

Sometimes there is nothing quite like a solo round

About to make the turn after putting out at 8th gr

Our ‘Struie‘ Course is a fine test in her own

Autumn 🍂 sunrise and preparation for a glorious