Organisations based within the IV25 postcode can apply for donations of up to £500 with payments determined by a four-strong committee, including the club Captain and the two immediate predecessors, as well as a nominee from Dornoch Area Community Council. The overriding criterion is that awards must be used for the purpose of contributing to the common good of the local community.

We are only able to continue donating back to the community with the income generated from our visiting golfers and each year the club donates up to one per cent of the club’s green fee income to the community fund. Neil Hampton, Royal Dornoch Golf Club’s general manager, said: “We are very proud members of our community and feel privileged to be in a position to help other organisations which contribute to community life.” 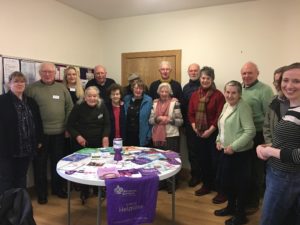 Royal Dornoch have officially launched their bee project as part of their environmental activity.

The Highland club have added hives on the renowned links to help with the work of the valuable insect.

The bees and hives – and their continued upkeep – have been generously sponsored by George Lengvari in memory his father, also named George, who was Scottish Master Beekeeper (Master Certificate #249) at nearby Cromarty House.

Royal Dornoch are active in promoting sustainable golf and working with GEO (Golf Environment Organisation), with the bee project part of this activity.

The hives help the bees to thrive and builds on work across the Championship and Struie Courses in creating areas for wildlife to allow the environment to flourish.

Neil Hampton, General Manager at Royal Dornoch, said: “We perhaps take bees granted and many of us don’t realise the huge amount of work they do to ensure that the ecology of the world is stable.

“At Royal Dornoch we take the future very seriously and want to ensure that the planet is safe to inhabit for many for generations to come and this is just another part of what we are doing to achieve that.”

George added: “There is nothing my father would have been prouder of than for Royal Dornoch to recognize the importance of bees and the invaluable role they play in ensuring the health and sustainability of much of our planet's vegetation. As he would have said, ‘without bees there can be no life as we know it’”.

Last month, Royal Dornoch became officially GEO Certified after receiving their certification. Course Manager, Eoin Riddell, and his team are working hard in this area on and off the courses.

“GEO covers everything to do with running a golf club, not just the course,” said Eoin. “It deals with the clubhouse, the kitchen, the Pro Shop and other areas. For example, using reusable bottles or using local produce to keep down the carbon footprint of deliveries. We are trying to protect the golf course but doing it in an environmentally sensitive manner.

“It has now become a big thing in golf, with the whole industry working harder in this area. We do try and work with the environment and try and help it as much as we can.” 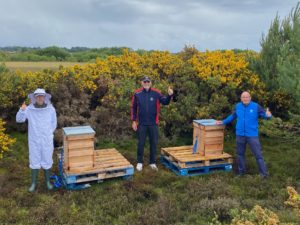 Image: George is pictured at the bee hives with Captain, Willie MacKay and a member of our Greens staff.

Saltmarshes provide important habitat for a wide range of wildlife and helps protect coastal land from flooding and erosion. However, shoreline degradation and climate change are increasingly placing these grassland areas under threat. A number of gaps in the saltmarsh habitat in the Dornoch Firth means part of the Royal Dornoch’s Struie Course is vulnerable to flooding and even being lost to the power of the waves.

Royal Dornoch, since 2018, has committed to providing £10,000 a year, for 3 years towards a project of restoring the saltmarshes and in 2021 donated a further £5,000 bringing the total donated to £35,000. This project is being organised and promoted by Dr Clare Maynard, a research scientist at St Andrews University and Chair of the Marine Alliance for Science and Technology. Dr Maynard said “Saltmarshes absorb wave energy. When we studied the Eden Estuary it was clear that land behind saltmarshes was in pretty good shape and far less likely to be eroded or flooded, whereas areas where there were no saltmarshes were clearly getting pounded by the waves and were at risk.”

So, with the help of Dr Maynard’s Team, our Greenkeeping staff, community volunteers and the Dornoch Academy students, the transplanting of the saltmarsh plants around the 10th hole has been achieved in the hope this will help to safeguard the Struie course and allow it to remain playable for years to come. 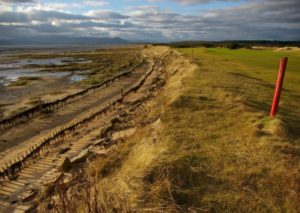 (Shore side of the 10th Fairway - Struie Course)

Royal Dornoch has been awarded the GEO Certified® ecolabel, an international symbol of ‘great golf environments’. This recognises clubs that have met high standards for performance in nature conservation, water and energy efficiency, ethical and environmental supply chain, pollution control and community engagement.

Scott Aitchison, our Deputy Course Manager, helped drive forward this project and which led to the accreditation of GEO. He said “We are a rural site of stunning beauty, thriving with flora and fauna. We are responsible for a massive area of land which in itself is diverse. We have everything from grass airstrips, fields for grazing through sports turf to dune land. We are "links" and we encapsulate the very essence of joining the sea to the farmland. We are managing this diverse range of land as a members club who are active in supporting our community. We are consciously changing the mind-set of a large staff to think about the impact we have on the environment in each task we perform which amounts to our footprint as a business. Our recent, Global Environment Organisation (GEO) accreditation suggests we are doing things with the right attitude. We are new to this but feel we've come a long way in a short time.” 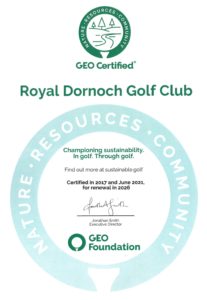 In November 2019 Royal Dornoch signed the Armed Forces Covenant. We recognise the value of serving personnel, reservists, veterans and their families, the sacrifices they make and the contribution made to our community and the UK as a whole. By signing the Covenant we pledge to support our Armed Forces community, to treat them fairly and not disadvantage them as a result of the service they have provided to our country.