THEY may be separated by an ocean and more than 3600 miles, but Royal Dornoch Golf Club and Pinehurst Resort share a common bond.

Legendary US golf course designer Donald Ross grew up in the town on Scotland’s east coast and his masterpiece, Pinehurst No. 2, owes much to the natural links he tended as greens keeper and as his hometown club’s first ever professional.

The ties prompted an historic on-line gathering involving representatives from golf clubs and their local communities to toast the 150th anniversary of the birth of Ross.

In the Royal Dornoch clubhouse, President Gordon Lawson, past captain Willie MacKay, general manager Neil Hampton and local Provost Paddy Murray raised a glass of whisky in memory of Ross, while John Strickland, Mayor of the Village of Pinehurst, led glowing tributes and champagne toasts to the “golfing pioneer” in North Carolina.

With a Royal Dornoch flag providing the backdrop, the mayor was joined by guests including Pinehurst Resort president Tom Pashley, J.J Jackson – a member of Royal Dornoch and Pinehurst – and Tin Whistles club captain John McClain. 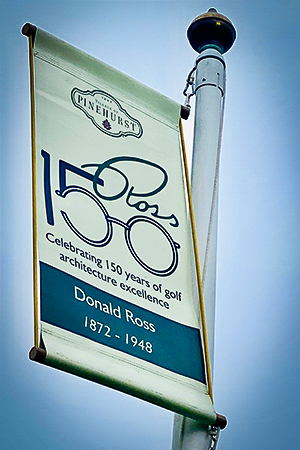 American authors Chris Buie and Brad Becken Jr – who have kindly dispatched copies of “The Life and Times of Donald Ross” and “The Golf Architecture of Donald Ross” to add to the Royal Dornoch clubhouse library – were invited to reflect on the Highlander’s extraordinary legacy.

Chris hailed Ross as the US equivalent of Scots golfing patriarch Old Tom Morris, with Pinehurst cast in the role of St Andrews.

He said Dornoch’s “beautiful shores” and legendary club secretary John Sutherland had played an integral role in the formative career of Ross, before he left Scotland for a new life in the States in 1899.

“Ross was at the forefront of the group that brought golf here and established it as part of American civic life,” said Chris. “He was involved in every aspect of the game.”

While Pinehurst No2 is widely regarded as the Ross masterpiece – underlined by its recently acquired status as anchor site of the US Open Championship – Brad highlighted the heritage created by “a remarkable man and a remarkable architect.”

Brad, who has been president of the Donald Ross Society of America since 1989, noted that Ross had been at his most productive in the 1920s, with many North American courses counting down to their Centennial celebrations.

One of the society’s aims is to preserve and restore Ross designs, with more than 100 courses encouraged to turn back the clock to create his original layouts.

“This is an opportunity to embrace the Ross legacy and it is reinvigorating,” said Brad, who has played the 400-plus American courses which bear the Ross imprint.

While Provost Murray stressed that Dornoch appreciated the economic benefits of the many US golfers making a pilgrimage to the north of Scotland, Mayor Strickland looked forward to strengthening the existing ties between the two communities.

Royal Dornoch general manager Neil said the club was delighted to welcome golfers eager to share in the joy of the original “running game” demanded by the Championship Course.