The ambitious Highland club couple teed-off at the Championship Course as the sun rose at 4am and, after rounds at nearby Skibo Castle and the Struie, they completed the final 18-hole leg back where they started shortly after 6pm.

The weary pair admitted a celebratory Guinness and Isle of Harris gin outside the clubhouse never tasted so good!

Their achievement was made even more memorable by both golfers bouncing back from Covid. 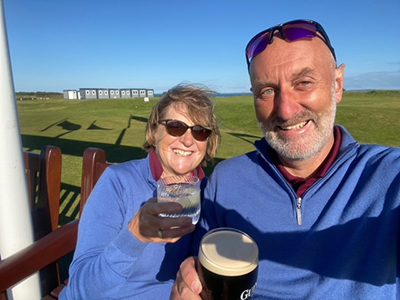 With donations still flooding in, the Bethunes have been thrilled with the support their fundraiser has enjoyed, with the initial £2000 Gofundme target sitting at almost £5,000 by the time their final putts dropped.

A close friend and his wife are currently walking from Land’s End to John O’Groats to raise money and awareness under #onemanwalkingamiliontalking following the loss of a son to suicide.

That inspired the Dornoch couple to take to the links.

The Canmore Trust and Royal Dornoch captains’ chosen charities Sight Action and Maggie’s Highland, along with Motor Neurone Disease Scotland, will all benefit from their fabulous fairways fundraiser.

“We are grateful to everyone who has been so generous in their backing and to the teams at Royal Dornoch and Skibo Castle for their wonderful support,” said recently crowned Seniors champion and four handicapper Gary (58).

“Special thanks are due to men’s captain Willie MacKay for setting his alarm to make sure he saw us off at the unearthly hour of 4am!

“And it was nice of the seven fourballs who let us through on our final round.

“We were early to bed but feeling surprisingly fresh after a good night’s sleep.

“It was a great day, with the sun shining and the breeze for the final round keeping away the midgies.

“We were a bit worried after being laid low recently by Covid, especially Debbie. But she was an absolute star.

“We are both quite fit with the golf – Debbie is a keen 21 handicapper – and walking the dogs.

“That served us well and the important thing is the money that we have raised for The Canmore Trust and the other charities.”