It is just over eight years since a teenager from East Lothian made his mark at Royal Dornoch, lifting the Scottish Amateur Championship title for his then biggest win in golf.

It acted as a springboard for more amateur triumphs and onto the professional ranks, where he is enjoying success with a clutch of other young Scots. Reflecting on one of his best days in sport and his love for our links, we caught up with European Tour professional Grant Forrest for an exclusive Q&A.

Grant, it must be a nice memory to have, looking back to August 2012 at Royal Dornoch?

“Yeah, it was my first win at men’s level. It was big, and in the circumstances, golf wasn’t really at the forefront of my mind that week. I lost my dad two weeks beforehand and golf wasn’t the most important thing. Sometimes that can help you and I played great all week. 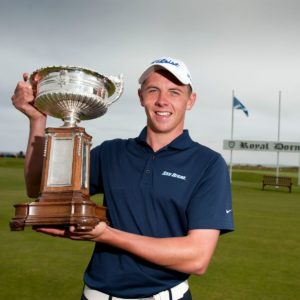 “I went up and stayed with Calum Stewart, one of my good mates who lived in Brora at the time. I got the train up and it was a nice week. Calum was on the bag, he helped steer me round. Having someone with local knowledge definitely helps over a week, as you see the course in all different conditions and with different pins.”

Had you played at Royal Dornoch before?

“It was my first time there. Obviously, I had heard a lot of good things about it, like when I used to caddy at Muirfield and Americans would rave about it. Knowing Calum too, he was a member at Dornoch and caddied there a lot as well. To get a full week of golf there, including the practice rounds, it’s a special place. It’s quite far up there, but it’s a great golf course.”

You were only aged 19 at the time and battled through a long week to win the Scottish Amateur. Do you have any particular memories of the early rounds?

“I played against Neil Hampton, the general manager, in the first round. I saw the draw and Calum mentioned his role! I was worried, I was thinking he would know the place like the back of his hand. I’m sure he sleeved like a 30-footer on the first for birdie and I was like ‘oh jeesh’! I was relieved to get through that one!”

You defeated Richard Docherty from Bearsden 9&7 in the 36-hole final, it was the biggest margin of victory since Colin Montgomerie 25 years previously at Nairn.

“To be brutally honest, it was probably the worst I played all week. I think, historically, it can happen in finals. There is a lot of hype and for a week as long as that you are going to have a couple of rounds when you don’t play too well. Nerves had a lot to do with it. I think I hit a semi-shank off the first, it was very close to the hosel anyway! My short game was very good that day to help me win.”

Have you been back to Dornoch since?

“I’ve not been back up, but I’m going to try and get up a trip up sometime with Calum when I can. There are so many good courses in the Highlands and it would be good to get there sometime and do a wee run of them.”

What is your favourite hole at Royal Dornoch?

“For me, the 2nd, the par-3. The old saying is the hardest shot at Dornoch is your second shot at the 2nd. I think I parred that hole every day and ended up obviously winning it most of the time. That is probably the one that sticks in the mind the most. I played for the front of the green as much as I could and also made a nice couple of up and downs.”

Do you feel more at ease on links courses, given your background at Craigielaw?

“When I moved from Bathgate to Craigielaw, it was quite a big adjustment at first, playing upturned greens and faster and firmer surfaces. But it definitely developed me as a player and in junior golf if you could play to your handicap or better at Craigielaw you could sort of do it anywhere.”

You are competing well on the European Tour, inside the top 60 on the Race to Dubai. Did lockdown come at a bad time?

“It did, and it didn’t. After Qatar in March, I was set to have about a month off anyway, leading up to The Masters and the WGC event before that. I was ready for a wee break at the time, but obviously not four-and-a-half months. Not practicing and playing was frustrating, as we don’t really know anything else. It was a strange time, you definitely lose a bit of momentum if you feel you are playing well, but it’s been great to start again. There is loads to play for.”

With the likes of you, Connor Syme and Robert MacIntyre all impressing, how much are you all inspiring each other?

“Yeah, definitely. It’s the whole culture of guys doing well, you just feed off it. I think Scottish professional golf needed that. It had been a few years since a group of guys had come through. It’s good being out there. We all have our own expectations and we all know what we are capable of. It’s just good to have a lot of positivity with the guys and that can hopefully breed more success.

“I was pretty close in Mauritius in December, one shot off the play-off, and then going into the final round in Dubai I was right there as well – that was probably one of the toughest course set ups we will play. I feel like I can compete on any course now and it’s just a case of getting it all to click on a given week.”